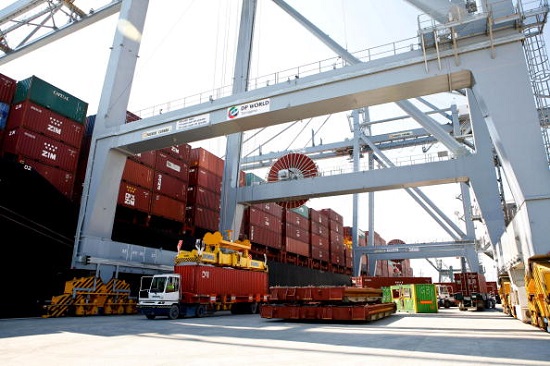 February 26, 2018: In a new development, on February 22, 2018, the Government of Djibouti cancelled its contract with DP World for the Doraleh Container Terminal (DCT) concession.
According to a press release from the Djibouti Ports and Free Zone Authority (DPFZA), the government took this decision in light of the recent poor performance of the DCT, and to rectify irregularities in the agreement covering its operation.
The release further clarifies, contrary to the statement released by the Government of Dubai, the agreement for was not for DP World to design, build and operate DCT – what is often referred to as BOT – but a joint venture between DP World (33.33 percent of the shares) and Port Autonome International de Djibouti (66.66 percent of the shares).

Since 2008, DCT has achieved only 57 percent of its total volume, despite operating in a favourable import-export environment.
In the meantime, DP World developed other ports in countries close to Djibouti and used aggressive tactics such as the deliberate slowing of the development of DCT in favour of their main asset at Jebel Ali. The original agreement, which contained a number of irregularities, excluded Djibouti from decision-making processes and the management of the company.
Negotiations undertaken in good faith by the Government of Djibouti and its representatives to find a solution to this situation, going back six years, were rejected by DP World. These efforts had included the establishment of dedicated working groups, and the use of international legal assistance.

Last month, DPFZA engaged DP World in detailed discussions, with a view to finding a good faith settlement that included the purchase of DP World’s stake. DP World declared their desire to sell their shares in DCT but subsequently added an additional restriction on Djibouti developing new ports on its territory. This condition, which poses a serious threat to Djibouti’s national sovereignty, was rejected by the Government of Djibouti.
In response, the Government of Djibouti has now asserted its legal right to assume management of the DCT. DCT has now been placed under the authority of the Doraleh Container Terminal Management Company (DCTMC), a fully state-owned company that will be managed by DPFZA. The port will be managed and developed in line with DPFZA’s strategy to develop Djibouti as a world-class trade and logistics hub, building on its existing position in the region.

In another statement issued by DP World, it accused the Government of Djibouti illegally seizing the control of the DCT from DP World that designed, built and, since 2006, operated the Terminal pursuant to a concession awarded by the Government in 2006. The state-of-the-art Terminal is the largest employer and biggest source of revenue in the country. It has operated at a profit every year since it opened.
The illegal seizure of the Terminal is the culmination the Government’s campaign to force the DP World to renegotiate the terms of the concession. Those terms were found to be ‘fair and reasonable’ by a London Court of International Arbitration tribunal led by Lord Leonard Hoffman and Sir Richard Aikens, both highly respected former English jurists.
DP World has commenced arbitration proceedings before the London Court of International Arbitration to protect their rights, or to secure damages and compensation for their breach or expropriation.

To protect our interests, we have been compelled to commence a new arbitration on February 20, 2018, against the Government in London, seeking a declaration that the contracts are valid and binding on the Government and to obtain urgent interim relief. We demand that the Government will cease its unlawful conduct and continue to work as partners with us in the same spirit of cooperation that has been in place for the last 18 years, which has yielded hundreds of millions of dollars of direct and indirect benefits to Djibouti and enhanced its attractiveness as a leading investment destination in East Africa.

DP World has a 33 percent equity stake in the port of Doraleh (Djibouti) which has a capacity of 1.25 mn TEU’s. DP World can confirm that there will be no material financial impact to the Group.