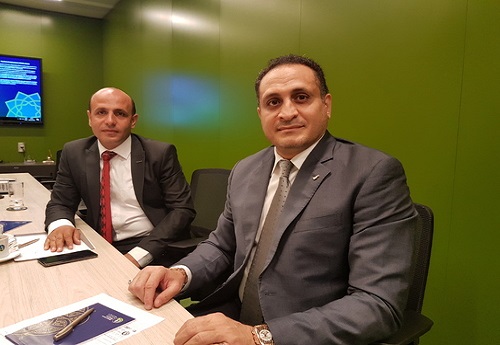 Al Ahram expects to reach USD 100 million worth of businesses with Brazil this year. The Mercosur-Egypt free trade agreement encouraged the company to invest in the country.

São Paulo – The president of Egyptian trading company AL AHRAM, Ahmed Hussein, is in Brazil to formalize the opening of an office in São Paulo and visit companies from several sectors, among them, meat packing companies. According to him, the free trade agreement between Egypt and Mercosur (which went into effect last year) encouraged him to invest more in the country via the new office and good business opportunities.

ANBA talked with Hussein and with the group’s representative in Brazil, Ahmed Farouk, when both visited the Arab Brazilian Chamber of Commerce, which is promoting and setting up meetings between the group with Brazilian companies.

“We’re hoping to reach USD 100 million worth of business in Brazil throughout the year, only exporting Brazilian products,” said Hussein. He’s also planning to bring products from other countries to Brazil, such as fertilizers and oil from Russia.

The Egyptian group was founded in 2011 and began to operate in Brazil in 2016. Since then, the company has deal near USD 40 million per year in Brazilian products and commodities. Ahmed Farouk, who has been the group’s trade representative in the country for three years, will be the new trade manager of the new office.

In addition to Egypt, the trading company has offices in many other countries, such as Russia, United Kingdom, France, United States and United Arab Emirates. They are, currently, the largest exporters of (Russian) fertilizers to India, and their main product in the Russian oil, with contracts including the United States.

The companies interested in negotiating with the trading company can contact Ahmed Farouk by email (a.farouk@alahramgroup-eg.net) or phone (55 11 94329-0617).