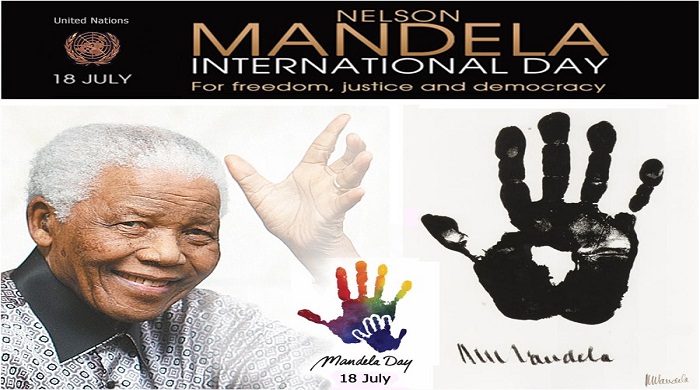 Today, 18 July 2018, is celebrated the Nelson Mandela International Day, a day of celebration in honor of Nelson Mandela, officially established by the United Nations on the day of his birthday. This year is particularly important because exactly 100 years have passed since the birth of Madiba (18 July 1918). One more reason to reflect and be inspired by his life and values, such as freedom, equality and respect.

It’s no coincidence that the Nelson Mandela Annual Lecture is one of the Foundation’s flagship programs to honor its founder, Nelson Mandela, a symbol of freedom, firmness of spirit and reconciliation. This important event invites global leaders to drive debate on critical social issues in South Africa and around the World.

The 16th Nelson Mandela Annual Lecture was delivered by former US President Barack Obama at the Bidvest Wanderers Stadium in Johannesburg on 17 July 2018, a day before Nelson Mandela International Day. About 15,000 people attended.

To honor the centennial of Madiba’s birth, the 2018 Lecture’s theme was “Renewing the Mandela Legacy and Promoting Active Citizenship in a Changing World”. The Lecture focused on creating conditions for bridging divides, working across ideological lines, and resisting oppression and inequality.

We would like to suggest some extracts from Obama’s speech that made us reflect and move.

“Do you remember that feeling? It seemed as if the forces of progress were on the march, that they were inexorable. Each step he took, you felt this is the moment when the old structures of violence and repression and ancient hatreds that had so long stunted people’s lives and confined the human spirit — that all that was crumbling before our eyes.

And then as Madiba guided this nation through negotiation painstakingly, reconciliation, its first fair and free elections; as we all witnessed the grace and the generosity with which he embraced former enemies, the wisdom for him to step away from power once he felt his job was complete, we understood that — (applause) — we understood it was not just the subjugated, the oppressed who were being freed from the shackles of the past. The subjugator was being offered a gift, being given a chance to see in a new way, being given a chance to participate in the work of building a better world.”

“So, we have to start by admitting that whatever laws may have existed on the books, whatever wonderful pronouncements existed in constitutions, whatever nice words were spoken during these last several decades at international conferences or in the halls of the United Nations, the previous structures of privilege and power and injustice and exploitation never completely went away. They were never fully dislodged. (Applause.)

Caste differences still impact the life chances of people on the Indian subcontinent. Ethnic and religious differences still determine who gets opportunity from the Central Europe to the Gulf. It is a plain fact that racial discrimination still exists in both the United States and South Africa. (Cheers and applause.) (…) In other words, for far too many people, the more things have changed, the more things stayed the same. (Applause.)” (…)

“And a politics of fear and resentment and retrenchment began to appear, and that kind of politics is now on the move. It’s on the move at a pace that would have seemed unimaginable just a few years ago. I am not being alarmist, I am simply stating the facts. Look around.”

“So, on Madiba‘s 100th birthday, we now stand at a crossroads — a moment in time at which two very different visions of humanity’s future compete for the hearts and the minds of citizens around the world. Two different stories, two different narratives about who we are and who we should be. How should we respond? (…)

Let me tell you what I believe. I believe in Nelson Mandela‘s vision. I believe in a vision shared by Gandhi and King and Abraham Lincoln. I believe in a vision of equality and justice and freedom and multi-racial democracy, built on the premise that all people are created equal, and they’re endowed by our creator with certain inalienable rights. (Cheers and applause.) And I believe that a world governed by such principles is possible and that it can achieve more peace and more cooperation in pursuit of a common good. That’s what I believe.
And I believe we have no choice but to move forward; that those of us who believe in democracy and civil rights and a common humanity have a better story to tell.”

“Madiba reminds us that: “No one is born hating another person because of the color of his skin, or his background, or his religion. People must learn to hate, and if they can learn to hate, they can be taught to love, for love comes more naturally to the human heart.” Love comes more naturally to the human heart, let’s remember that truth. Let’s see it as our North Star, let’s be joyful in our struggle to make that truth manifest here on earth so that in 100 years from now, future generations will look back and say, “they kept the march going, that’s why we live under new banners of freedom.” Thank you very much, South Africa, thank you.”

We hope was a pleasant reading as it was for us!
Africa Logistics Network Team