The third annual Meeting is coming! 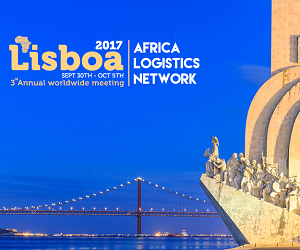 Press release
Over 130 managers from 97 Freight Forwarders companies will attend the third annual meeting of Africa Logistics Network.
From the September 30th to October 4th in Lisbon, Portugal.

Tuesday, August 29th 2017. – The third annual meeting of Africa Logistics Network will be held in Lisbon, Portugal from September 30th to October 4th.

The Freight Forwarders network “linking Africa to the World” is growing year by year. Compared with last year Meeting, the third one is going to have an increase of 30% on the number of the Companies attending and 40% on the number of CEOs and Managers.

Nowadays all the world is speaking more and more about the importance of the development of the African Continent for the worldwide economy, we are proud to have affirmed this importance three years ago and have tried to organize a Group of specialized and reliable Freight Forwarders accordingly.

All the reason of the creation of our Network have been confirmed.

“One of the logistic problems in the African market, is the reliability of small and medium sized companies – says Mr. Alessandro Saponaro, chairman of Africa Logistics Network-. ALN works to recognize the most professional ones, by linking them to the Network. As a result, this increases their competitiveness and, at the same time, reduces transport costs in Africa.

“We didn’t expect such a significant development – says Alessandro Saponaro –. In just one year since the first meeting, we have almost reached complete coverage of Africa:  95% of the Countries, 98% of population, 98% of Continent surface. Only a handful of nations still has to be selected their own members, but we are sure that the meeting will attract the growth of the network into the Countries that now have not yet Members.

“The network – adds Alessandro Saponaro – was born by our awareness that Africa is the future for development. Within and in trading with the rest of the world. Africa’s development is growing at the same time with the level of education, professionalism and social cohesion. In a small way we are happy to lend a hand in this and also to be able to create new opportunities for our members, because Africa is a continent inhabited by a billion people and has begun to grow, often in double figures, and to see established a new middle class and widespread professionalism. Regardless of the persistent – at times huge – economic, social and political problems”.

The main part to the meeting is dedicated to one-to-one talks between participating members of the Network but there will be many opportunities for socializing and strength the friendship.

After the 3 days meeting, about 40 participants are going to attend also a touristic trip of 1 day in the beautiful Lisbon terminating in a local cuisine Restaurant on the Tago River.